Thursday saw another trip to TechUK for the second London VMware Users Group of the year. It was, yet again, a very educational and entertaining community driven event with sessions covering a whole range of topics from enterprise scale implementations of hardware and software right down to the nitty-gritty of running your own HomeLab.

After the initial welcomes and introductions, the day kicked of with a session from Luca Dell’Oca of Veeam. Entitled “Veeam Backup and Replication: Worst Practices”, this was an often humorous look at what not to do when planning and implementing a backup regime. He covered many of the common mistakes when backing up a virtual environment, and although some parts were product specific (for example how the Veeam scheduler prior to v9 was not optimised for the hundreds of jobs a per-VM backup strategy would involve) there was a lot of generic advice. Highlights for me included

Next on the agenda was the Plenary Keynote, where Simon Richardson of VMware went through the new developments in the Software Defined Datacentre portfolio. He pointed out that the only constant is change, and that means there’s always a lot to catch up on.

Simon discussed using the Hyperconverged SDDC as the best of both the traditional DC world and the Google/Facebook/Amazon “extreme” style of datacentre. Applying the analogy of a water company to IT he suggested we want to be in the position where we can turn on a tap and compute comes out.

There’s new features in the vRealize suite as well, vROps producing intelligent workload balancing and Log Insight for diving into the cause of a fault or performance issue.

vRealize Business was a new component for me (more on that later in the day) and I can definitely see the use of being able to show (or chargeback) the actual cost of a VM- taking into account all the factors- environment, hardware, software, support, manpower, and so on. Although there was little OpenStack adoption in the audience, Simon also touched on VIO- VMware Integrated OpenStack.

After a quick break in the Thames Suite (named in honour the breakroom in the previous London VMUG venue :) ) I caught up with VSAN in more depth in a talk by Simon Todd (and earned some Cloud Credibility points along the way). VMware’s Virtual SAN is getting wider and wider adoption, even branching outside of the traditional Datacentre environment into Offshore Oil Rigs and even Submarines. This is more than just Business critical this really is Mission critical. The ability to deploy (and scale) large arrays quickly is a key selling point, multipetabyte arrays spun up in a matter of minutes and customers who had cut both costs and deployment times. 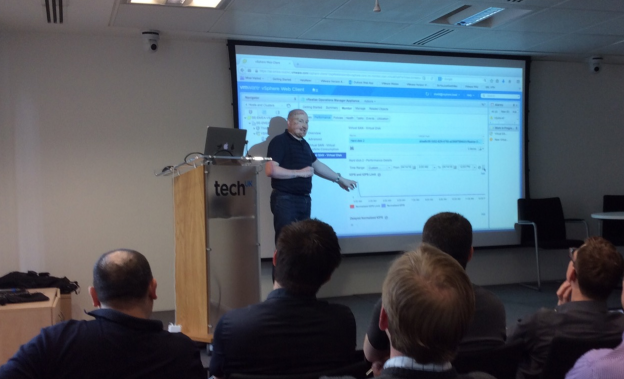 Moving a bit more into the technical detail- Simon explained how VSAN is an object store with each VMDK, each file, becoming an object. This allows for per-object policy, so performance, IOPS limits, and resilience can be set, and then monitored, at the VMDK level. When pushing for that ultimate performance, this granularity could be of great benefit.

That brought us to the halfway point in the day’s proceedings, where there was lunch an and opportunity to catch up with the events sponsors- PernixData, Veeam, and Nimble Storage.

Edit- Part 2 can be found here.