Rubrik have become the new “cool kid” of backups and in the past couple of years I’ve seen lots of enthusiasm in the community for the product. To reinforce this their stand at the Barcelona show featured a Mercedes Formula 1 car, their marketing giveaways include custom LEGO figures based on Mr Men books (you can’t not be cool with that combination), and they topped it all when they gave away 1000 copies of the Host Resources Deep Dive book by Niels Hagoort and Frank Denneman to attendees. Aside from the swag Rubrik have made impressive steps in the Gartner Magic Quadrant and received awards at VMworld US last month. 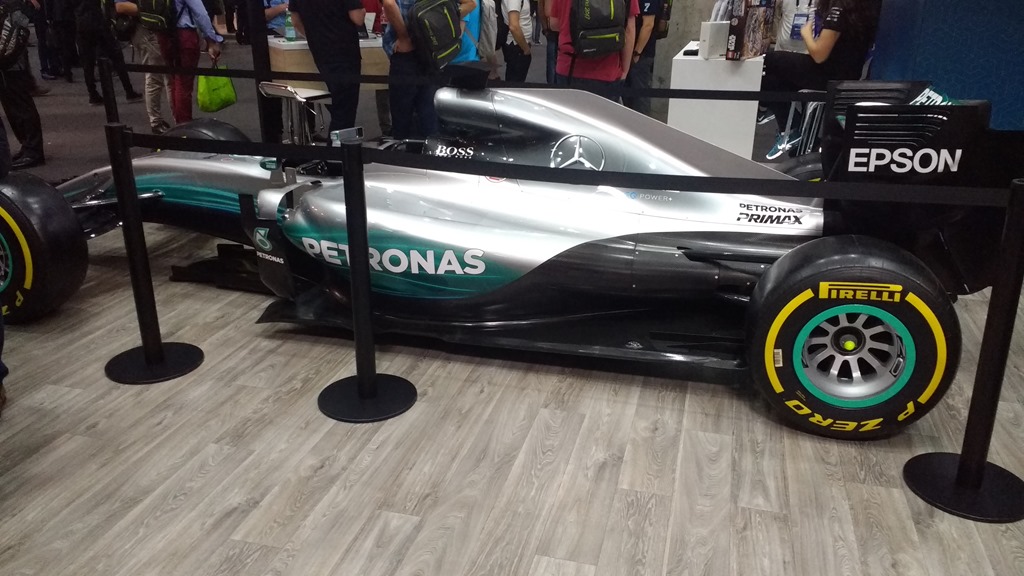 Whilst at VMworld I was privileged to be able to get a Rubrik executive briefing with Bipul Sinha, Cofounder and CEO, and Jerry Rijnbeek, Director of Sales Engineering. This was a great paring for me, Jerry being the salesman was suitably enthusiastic and outgoing about Rubrik both now and in the future whilst Bipul was quieter, more reserved, whilst exuding confidence in the product they had built and its ability to simply meet a backup requirement quickly and painlessly.

This confidence is reflected in one of Rubrik’s big selling points- there are numerous customer stories offered where it’s taken hours (or less between an engineer arriving onsite with a Brik and a virtual environment being protected. Rubrik achieves this by owning the whole backup stack- they supply the hardware in a 2U box called a Brik and they write the software (“We are a software company” I was reminded). Therefore, with a VMware environment at least, it’s pretty much just a case of giving the box some IP addresses and pointing it at vCenter.

Rubrik as a company was founded in 2014, and sells itself as building a product for now, rather than adapting a product built for the past. This is a position which in my opinion divides the backup market- on the one hand are the more longstanding vendors (or at least those that follow a traditional model) who start from the position of file and database backup to tape and have then incorporated backup to disk (and cloud) and backup of virtual environments. Rubrik (and others) are coming from the other direction, building a product for today’s virtual environment backing up to disk or cloud and then incorporating things like file and database. Both routes have their merits depending on the environment that needs protecting.

A key feature in the Rubrik model is the ability to recover the backup quickly. This is done by provisioning a datastore directly from the “Brik”- one single unit can offer 30K IOPS, so even a production workload can be stood up almost instantly without the need to copy back to primary storage first. Once running the application can be vMotioned back to a more permanent location when convenient.

Another traditional feature of backup which is turned on its head is the notion of a backup window and schedule. A modern application doesn’t necessarily have a quiet time between 3 and 4 AM, especially in our 24/7 always-on world. The Rubrik software looks at the VM usage over time and tries to make an intelligent decision on when to do the backup- ideally when the CPU isn’t off the charts for example. 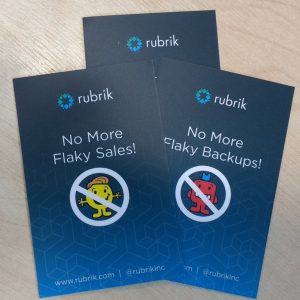 After the briefing Jerry took me back to the show floor and introduced me to Rutger Kosters (VCDX #209) who was kind enough to spend some time showing me a live demo- I was assured that 10 minutes would be enough for me to learn 95% about the product, it’s so straightforward.

Whilst 10 minutes might be a bit generous before taking on a production environment, we were able to go through a number of the features. Taking a VM, protecting it using the web-based UI (APIs are also available) and then pulling up a backup snapshot for use as a test VM. Beyond the basic “Brik connected to vCenter” Rutger was also able to show me how a second box could be added to scale the capacity, or to add replication. There’s also the possibility to replicate to the cloud for longer retention (via NFS/S3/Azure).

Whilst I’m aware that this was a sales pitch, and the flip-side of the coin is rarely shown in such situations, I was impressed particularly by the simplicity the solution offers in protecting a Virtual Environment

What does it do?

It backs up your virtual environment and enables the opportunity to use those backups for test/dev, recovery testing, etc.

What do I need to buy?

A “Brik”- a 2U box which needs power and network connectivity. This contains four nodes and some disks.

To Backup- Point your Brik at vCenter using the web interface, select VMs (or folders/ datacentres etc) and apply a backup policy.

To Restore- Via the web interface or API, stand up the VM directly on the Rubrik appliance, Storage vMotion it (back) to primary storage if required at your convenience.

Where can I find out more?

Please read my standard Declaration/Disclaimer and before rushing out to buy anything bear in mind that this article is based on a sales discussion at a trade show rather than a POC or production installation. I wasn’t paid to write this article or offered any payment, although I did independently pick up a Rubrik LEGO minifig and a signed copy of the Host DeepDive book. Oh, and a fidget spinner.