In a large organisation it’s commonplace to have a large IT organisation with staff taking on specific roles in the infrastructure to deliver part of the IT service. However, it’s often the case where a colleague outside of IT will always go to their nearest IT person regardless

of whether that individual is “first line” support or whether their skills and permissions are suited to solving the case at hand.

Whilst in a small company there may be only one or two IT staff charged with supporting everything, a large IT organisation will have some kind of service desk- a place for the users of IT services to call when they have an issue that needs addressing. The service desk or helpdesk (usually) isn’t there to make things more awkward for the user (why should I call the helpdesk when you’re in the office next door?) but to allow the IT staff in that adjacent office to to their job rather than answering phones and dealing with drop-in callers. It’s the same as calling 999 to report a fire, not going through the phone book looking for an individual fireman. 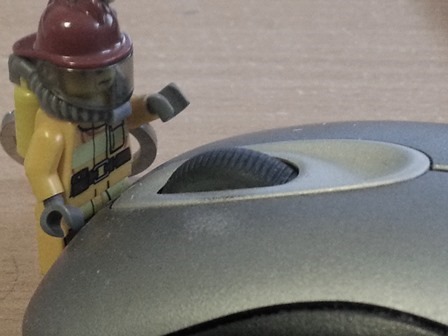 Any IT Pro can probably recount at least one tale of when they’ve had their head stuck in a computer and someone has wandered in asking them to fix their phone/ web browser/ printer because they don’t want to call the helpdesk. Similarly anyone who has worked in IT in a large organisation where specialities are separated into teams will find the phrase “I know you’re the database guy but can you fix my printer” all too familiar.

Yes- there are emergencies – if the boss comes in saying “I’m about to lose a million pound contract because my laptop won’t turn on” the technician should get their head out of the break-room projector and prioritise accordingly but, in my experience at least, the real “emergencies” are few and far between.

What’s the solution? That’s a difficult question. Whilst locking the IT staff away and having them tell users “no I can’t help- contact the helpdesk”, or “I’m not touching that till I have a ticket” is the direct method it doesn’t endear itself to good customer support.

The IT department needs to educate users why  there is a service desk and stress it’s benefits to the user . This message needs to come not just by company wide emails but also by everyone involved, from the manager, technician, helpdesk and analyst within IT, and from the management structure in the rest of the organisation.